San Francisco Skaters! Skating Place is now closed off for the final surfacing and mural application slated to start next week. I'm excited to finally help guide the final design into reality!
Nothing better than real-life roller skating, but this looks like fun and it's exciting to see that it will finally be released to console! I'm all for some high-speed roller derby style action without the injuries!
It's #BandcampFriday - Support our Roller Skate DJs TODAY!! All day, Bandcamp is waiving their share of sales to support artists still impacted by #COVID19 closures. That means 100% of proceeds go directly to the artists!
Nice feature from @washingtonpost on @naarsa.usa - Tasha has been gathering and curating black roller skating culture artifacts for many years, bringing them to display at many of the national skate jams. Amazing work.
"The 2022 Oscars cohost @MoreReginaHall tried out roller derby with members of New York City's @gothamderby league for @PEOPLE The Beautiful Issue. "I'm an honorary member of the team now," she said of the "scary" but "very carefree" sport."
From the @DetroitNews + @MotownRollerClub
My Tweets

Whether this COVID-19 health crisis has got you skating in your kitchen or you just need some weekend cleaning music, your friendly neighborhood dee-jay “White Chocolate” has got you covered for many moods!

Check out my assortment of skate tunes, or just fun throwback jams to keep you and your family dancing!

Look for WCRollerskate on Spotify, or click the link below:
https://open.spotify.com/user/w4d60ncamp2hifffb65e65hfz?si=BGh1USIITrCcFmeelE4WGw

I’m writing in regards to the proposed plans for 554 Fillmore, currently operating as The Church of 8 Wheels.

I think we’re all well aware of the struggle for affordable housing in the city. However, it seems that this developer seeks to use the housing scarcity to their own benefit, not that of the SF community and its residents.

My concern lies with the fact that the owner/developer purchased the land and building at 554 Fillmore with the full knowledge of the historical value and structural requirements of the former Sacred Heart Church, but now wants the rules to be changed in favor of their development.

What message would a committee approval send to other developers? Do we want to set the precedent that rules and regulations really don’t mean anything so long as the promise is large enough?

If these variances are allowed, a mere 36 people will be able to utilize this building. This limits housing benefits to a few, while separating thousands from the human benefits of health, fitness, connection and fellowship that recreational activities provide to its communities.

The Church of 8 Wheels is also a highly visible positive tourist attraction for San Francisco, frequently featured in airports and in-flight media. However, a new techie dorm crammed with people with no exposure to natural light or air is likely to attract a different kind of attention, a PR nightmare for the city.

So let me ask you, is 36 larger than THOUSANDS?
If you ask me, that math just doesn’t add up.

I am asking that the city reject these variances in accord with keeping the best interests of ALL of San Francisco residents in mind, not just a few.

Thank you for your consideration.

Prologue: For this years San Francisco Skaters showcase, I knew that I wanted to do something for the 30th Anniversary of the Rhythm Nation album. Let me tell you something, when you put on that Rhythm Nation uniform, it literally changes your DNA, molecules SHIFTED. I pulled on the final glove and immediately felt different; stronger, focused, determined.

As a bit of background, I first got into roller skating after a life changing injury to my hand. Over the years, I’ve developed additional cervical spine damage related to the ways my body has compensated for not having the full use of my hand. It’s been about 12 years since I’ve “danced with my arms” and I while I was preparing for this performance, I quickly discovered just how much mobility I had lost during that time. Only with the help of a physical therapist, and personal trainer I was able to pull this off in any capacity.
(There’s some real pain in those goofy faces, and I still can’t lift my arms right. lol)

It wasn’t a perfect performance by any means, but I love any chance I get to remind people of Janet’s timeless legacy and her messages of positivity and love. I hope you enjoy it too.

We had so much fun doing the Janet Jackson Roller Disco tribute a few years ago, the folks at The Church of 8 Wheels have graciously let me take over the booth for another great theme night! MOTOWN.
Just on the tail of #BlackHistoryMonth, we’ll be celebrating the 60 year anniversary of the Motown sound – on wheels!

Detroit is one of the original birthplaces of modern “dance skating” and is also the home of “Soul Skate,” one of the biggest, national adult skate jams.

Early Detroit skaters had to fight segregation during the civil-rights era, but once they were allowed in, they changed the game! Thanks to pioneering skaters like Bill Butler, who brought their jazz records to the rink, we have the modern flavor and styles that we all enjoy today!

Come down and enjoy 4 hours of great Motown hits plus lots of classic R&B, Soul & Funk to skate to!

Tune in to HBO February 18th at 8 p.m. ET/PT and immerse yourself in an incredible skating world many never knew existed!!

United Skates spotlights a community of thousands who fight in a racially charged environment to save the underground African-American subculture of roller skating. It’s a world that has been overlooked by the mainstream for generations while giving rise to great musical talents.

Directed and produced by Dyana Winkler and Tina Brown, United Skates received the Documentary Audience Award at the 2018 Tribeca Film Festival among dozens of other awards.

Skate music has it’s own unique groove to give you that “roll, bounce” action. There’s a reason that people have been rolling to these great old school tunes for decades!

For those on Spotify, I’ve put together for you 4 hours of roller disco fun! These songs are the real deal! This is a loose recreation of one of my DJ sets at San Francisco’s Church of 8 Wheels.

For best results, let it flow. Do not shuffle!

For any skaters who also like gaming, The Sims 4 + Seasons Expansion pack offers your Sims the joy of roller skating (and ice skating)!
I decided to create a “White Chocolate” Sim, and it turns out, she’s a better skater than me!

Click the hotlinks for more information on The Sims 4, and the Seasons expansion pack! 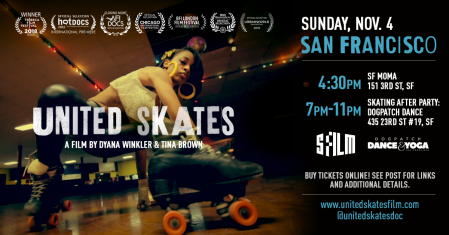 FILM SCREENING
The United Skates Documentary is finally coming to the Bay Area! SF Doc Stories 2018 has chosen to showcase the film at this year’s film festival!
Come and see the film, and bring friends and family so they too can learn about this amazing art form and community!

—
POP UP ROLLER SKATING AFTER PARTY

Lace up and join us for a pop-up roller skating party to celebrate the SF premiere of UNITED SKATES and the last day of Doc Stories!

Skate rentals will be available, but you’re encouraged to bring your own.

Thinking a lot about inspiration and motivation lately as I look to re-invigorate my own skate practice. I went back to some of the videos that were out when I first started skating (almost 10 years ago).  I’m reminded that what attracted me to this type of skating was the musicality, the finesse and the smoothness of the moves.

Here’s a collection of videos that inspired me over the years, I hope you will enjoy them as well!

No excuse not to practice!

This was the place, and the people that started it all for me. Cal Skate Milpitas.

The Soul Skate event takes place in Detroit, Michigan over Memorial Day weekend every 2 years. I finally had a chance to check it out!

It’s kind of crazy how I grew up here and had no idea about the rich skating culture that has existed there for decades. Thanks to the Soul Skate crew for an amazing time!

Here’s a few videos to give you a glimpse of the action.

The skate crews were out in full force with killer routines!

I even got to witness some of MY favs in person!

You can watch the entire playlist here. Enjoy!!