San Francisco Skaters! Skating Place is now closed off for the final surfacing and mural application slated to start next week. I'm excited to finally help guide the final design into reality!
Nothing better than real-life roller skating, but this looks like fun and it's exciting to see that it will finally be released to console! I'm all for some high-speed roller derby style action without the injuries!
It's #BandcampFriday - Support our Roller Skate DJs TODAY!! All day, Bandcamp is waiving their share of sales to support artists still impacted by #COVID19 closures. That means 100% of proceeds go directly to the artists!
Nice feature from @washingtonpost on @naarsa.usa - Tasha has been gathering and curating black roller skating culture artifacts for many years, bringing them to display at many of the national skate jams. Amazing work.
"The 2022 Oscars cohost @MoreReginaHall tried out roller derby with members of New York City's @gothamderby league for @PEOPLE The Beautiful Issue. "I'm an honorary member of the team now," she said of the "scary" but "very carefree" sport."
From the @DetroitNews + @MotownRollerClub
My Tweets

We don’t have to wait until our legends are gone to celebrate them. Janet is one of my all time favorite artists, a true inspiration. With the support of the Church of 8 Wheels, we’re going to dedicate a theme night solely to Janet!

Janet Jackson is an international mega-star but her accomplishments are actually quite underrated, and often diminished in the media in favor of newer artists for which Janet paved the way. Before Beyoncé and others, there was Janet. Miss Jackson if you’re nasty.

Janet has given us FOUR straight decades of uplifting party music as well as socially conscious music. She’s taken music video and live performances to new heights. She has created and broken numerous records for female artists. Many of them still stand today.

Please join me April 1, at San Francisco’s Church of 8 Wheels, for a celebration of Janet Jackson’s music on wheels! I can assure you, this is no April Fool’s joke!

Get the point? Good…let’s skate! 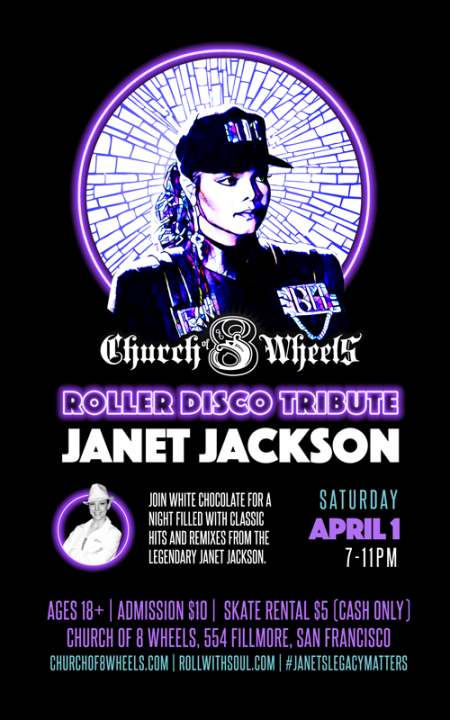